Starting a new nonprofit is a difficult process. Besides choosing a mission, developing a strategy and hiring employees, a new organization must figure out how they fit into the larger nonprofit landscape and find support.

“How can I attract supporters?”

“With whom can I partner?”

“What are people saying about me?”

These are just some of the questions nonprofits must answer to produce positive change in the world. And to find answers to their questions, nonprofits are increasingly turning to the Internet.

Unfortunately, information about nonprofits is scattered across the web, in social media, news articles, charity search engines and databases hidden behind paywalls. Many nonprofits, already facing severe resource constraints, lack the ability to effectively make sense of all this scattered information.

To address this problem, our team — Kyla Cheung, Giorgio Cavaggion, Ahmad Qamar, myself, and mentor Aron Culotta — has partnered with the Case Foundation to build the Giving Graph.

The Giving Graph, first described by the Case Foundation at this year’s SXSW, collects nonprofit-related information from across the web and brings it together in one centralized location. However, having lots of data about nonprofits in one place isn’t the point: What’s really exciting is that having all of this information in one place for the first time allows us to explore the connections between all of that information.

Using the methods provided by natural language processing and social network analysis, we can automatically find links between nonprofits, companies, charitable causes and individuals that would be difficult or time-consuming for a human to infer. Ultimately, the goal is to help nonprofits better understand themselves, better understand their sector, and better answer the questions they care about.

For example, imagine you are executive director at Dogs Deserve Better, a nonprofit dedicated to the well-being of dogs. To help the dogs of the world, you need money. So you ask yourself “Which companies should I approach for support?” Our approach is to answer this by addressing a slightly different question: “Which companies support nonprofits similar to me?” 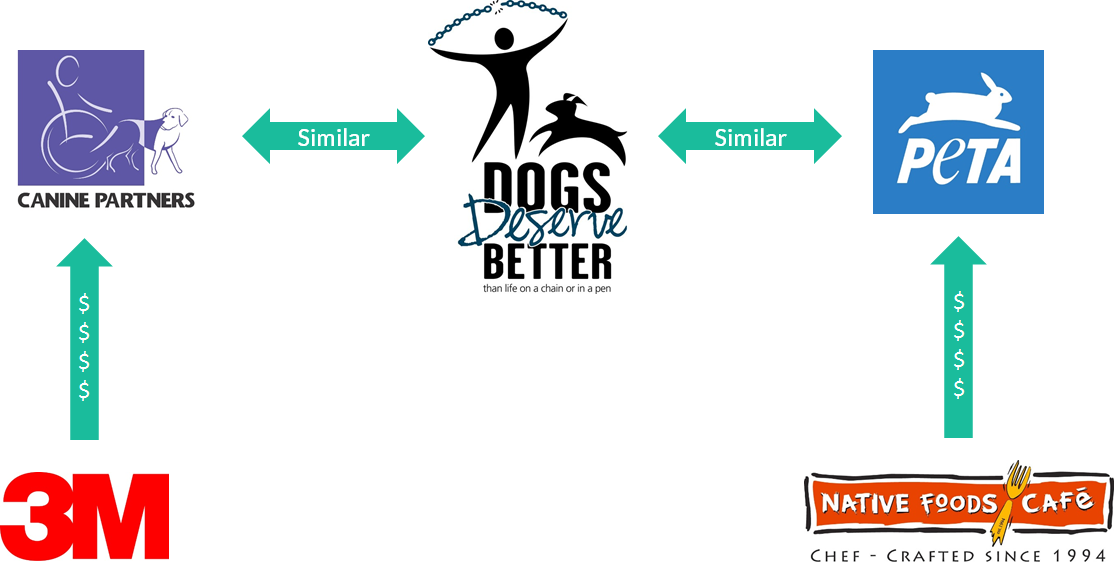 Of course, words will tend to appear more often in longer mission statements than in shorter mission statements. Additionally, some words, like “the” and “and”, tend to appear more often than other words. To control for these issues, we normalize the vectors using a technique called TF-IDF (term frequency-inverse document frequency). Finally, we compute the cosine similarity between the two normalized vectors, i.e., the cosine of the angle between the two vectors. This produces a number between 0 and 1, which is what we use as our nonprofit similarity score.

For tweets, we use an approach like the one we use for mission statements: looking for nonprofits whose tweets share words in common. Here’s a “hairball” visualization of nonprofit similarity based on tweets (created in Gephi, an open source network visualization application). Each dot represents a nonprofit’s Twitter account, with lines connecting similar nonprofits. A community detection algorithm groups the dots so that nonprofits with highly similar tweets are placed together (for details on the community detection algorithm used by Gephi, “Fast unfolding of communities in large networks.”). 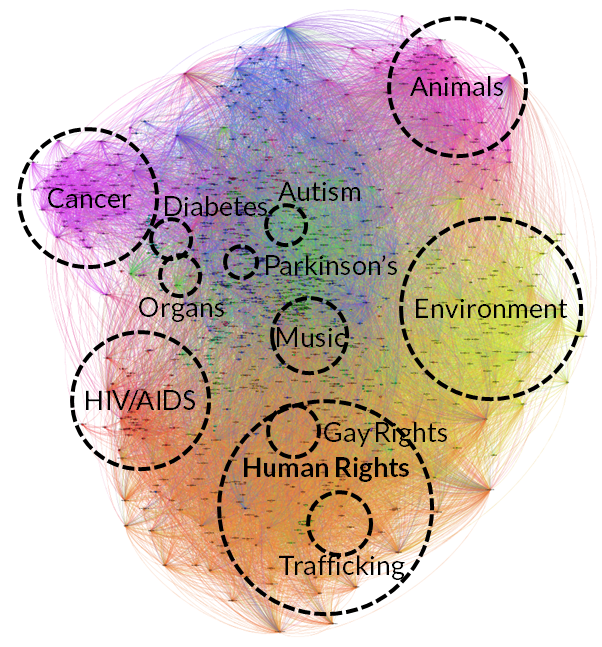 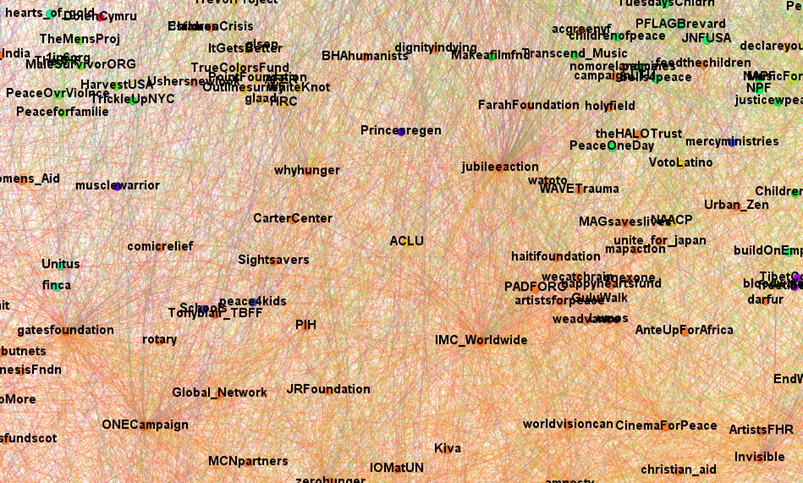 Here you can see nonprofits that fall into the high-level category of human rights, but subgroupings are also evident: in the upper-left are nonprofits related to domestic violence. To the right of those are LGBTQ rights organizations. On the right side of the image you can also see a grouping of nonprofits supporting causes in the developing world.

Adding Support to the Hairball

Currently, to determine that the context is a supportive one (as opposed to, say, a nonprofit and company being mentioned together because the nonprofit is criticizing the company) we simply look for key phrases that indicate support, such as “supported by”, “donated to” or “made possible by.” If warranted, we may try more sophisticated sentiment analysis methods in the future.

Now we can finally answer the question, “Which companies support nonprofits similar to me?”: By comparing mission statements, Twitter followers, and tweets, we found similar nonprofits. And by analyzing news articles and nonprofits’ webpages, we found companies that support those similar nonprofits. If you’re the executive director of Dogs Deserve Better, you can now see that 3M and Native Foods Cafe are potential supporters.

Of course, there are other questions that nonprofits care about. Other areas to explore include nonprofit collaboration (with whom should I write a grant?), branding (how is the language I use similar or different from the language used by other nonprofits?), and board member connections (to whom am I connected at other nonprofits or companies?). All of these questions are answerable from data that are already out there on the web. It’s just a matter of collecting them and finding the links between those pieces of data.