This is the true story of 42 strangers picked to live in a dorm, work together, and have their lives taped to find out what happens when people stop being polite and start getting real. Welcome to The Real World: DSSG.

Okay, so we don’t tape their lives (except for when they’re playing ping pong). But with the amount of social engineering that goes into the fellowship, at times it feels like we are producing a reality TV show. Here are a few things we hoped for from this year’s orientation activities, and how we’ve tried to achieve them.

Crafting the community. Our initial goal for orientation was that everyone learn each other’s names, share a bit about themselves, and reflect on why they’re here. We spoke about unique interests and areas of expertise, which ran the gamut from minimalist footwear to blues guitar, from the splits to tobacco lawsuits, from math pickup lines to baths and hot springs. When we asked everyone to voice their biggest concern, only our most badass staff member, Jen, said she had no fear. The rest of the group had a few anxieties in common, most notably balancing all the work! and all the fun! while maintaining energy and enthusiasm. The fellows were excited to do something meaningful, but nervous about whether the impact they made could meet their expectations. In a group that’s selected for being idealistic, disappointment seems all but inevitable; however, we think it’s helpful for fellows to hear that they’re not alone in that sentiment, and for staff to hear how we can help ease their minds.

Bringing out the teacher in everyone.  DSSG is a training program, but the relationship is a  reciprocal one: fellows should both train and be trained. Every fellow comes to the program with a wealth of knowledge. On UnDSSG, the grandaddy of all orientation days, we devote an entire day to showcasing the group’s myriad non-data-science talents. Everyone signs up to lead a session during one of four 90-minute blocks; those not leading rotate between stations. This year’s topics ranged from the cerebral (logic games and card tricks) to the physical (dancing, yoga, marathon running) and everything in between (mindfulness and drone racing). Titles included Embrace the Doge: Up Your Emoji Game, How to Procrastinate Efficiently, and Mushroom Foraging and Why Precision Is Often More Important Than Recall (Or How To Not Die). The day was punctuated by a photo booth, a new addition that was so popular it’s sure to become a tradition. We also honored an established tradition, as the more musically inclined played us out with a jam session. 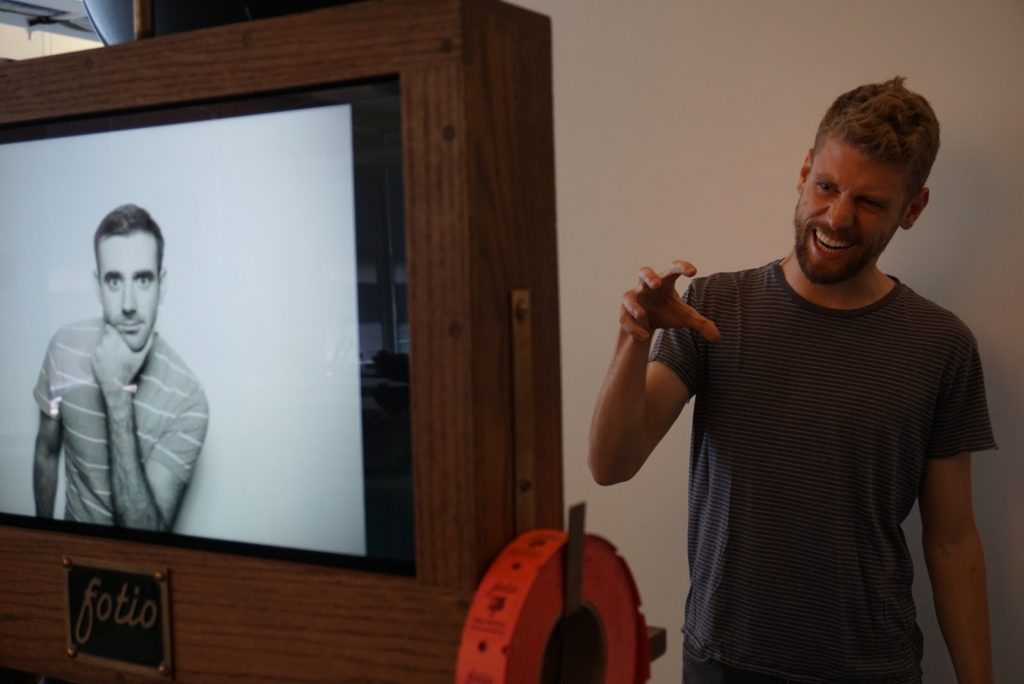 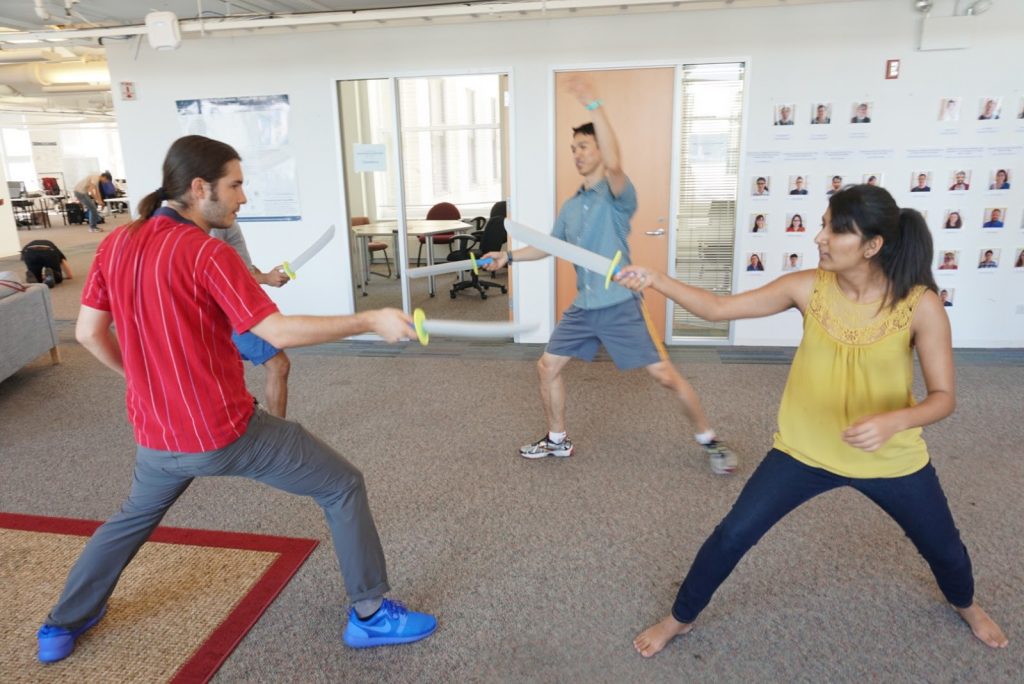 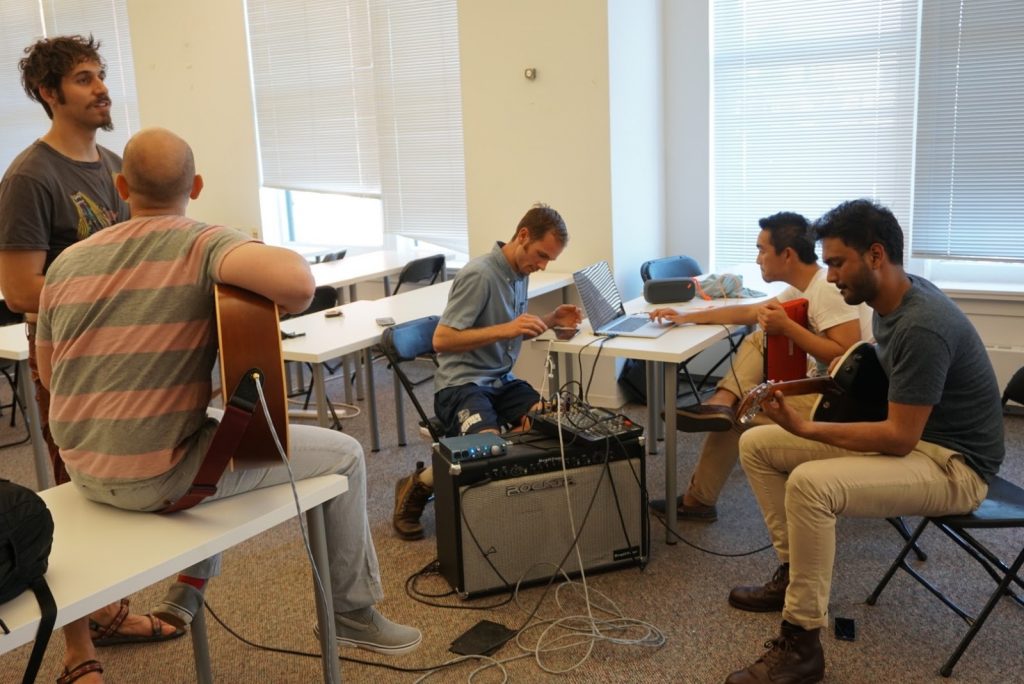 Starting the conversation about tough social issues. While on its face, data science may not seem an inherently human field, people are at the heart of everything we do. We encounter sensitive social issues, so we want to dedicate space to respectful and productive discussions. We also want to provide ample time, both within the arc of the summer and from day to day, for fellows to reflect on the ethical ramifications of the work we do. One way we’ve done this is through the spectrum activity introduced in the first week blog post. The most recent spectrum activity’s hot topics included “legalized recreational marijuana is good for society” and “everyone should be a feminist.” These discussions illustrate that although this is a highly educated and ostensibly rational group, we still base our stances largely on emotion or anecdote. Everyone interprets the prompts differently based on their own experiences, but there are no right answers; the goal is to listen and understand rather than deflect and debate. The activity generates more questions than answers, which we will continue to address in weekly discussion sections.

Engaging with the city of Chicago. We host the fellowship in Chicago, a civic tech hub with a history rich in social justice, activism and policy, as well as a city of neighborhoods. Since fellows spend the summer living and working downtown, we wanted to send them out to see what lies beyond the Loop. The fellows were randomly assigned to one of ten teams, each led by a staff member. The teams received sealed envelopes containing their assignment: go to a designated neighborhood and tell its story. In just about every Chicago neighborhood you’ll find parks and community spaces, interesting architecture and public art, bookstores and music venues. Teams could detail these features, or mention a reason to go back there this summer, or talk about the history. The only requirement was to document the outing with photos and pick up pre-ordered food (shoutout Adam and Chris!) on their way back to the office. When we returned, we had a feast while the teams told their stories. The hunt was a success: it brought people together, it taught them about the city, and most importantly, we realized our goal of hosting a pan-Chicago potluck, which has been a twinkle in our eye for quite a while.

Making the fellowship their own. As the summer progresses, we encourage fellows to take the reins. This means that we make the transition from staff-led trainings to fellow-initiated “teach-outs” and that each “pod” of four teams organizes a DSSG happy hour, complete with themed food and drink.

The process of shaping the summer has been staggering and rewarding, and now we’ve had the chance to watch it all unfold. Six months ago I was eagerly gobbling up application after application thinking “I can’t wait to meet this person!” and now they’ve materialized, here in front of my face, and better than I could have ever imagined. Seeing this come together has made all the hard work (and maybe even the tears shed over Embark) worthwhile. I hope that we’ve created a challenging, collaborative and supportive environment for fellows. And although we haven’t had as many booze-fueled brawls as our reality show counterparts, we did beat up a pinata, plus there’s still another happy hour left in this season… 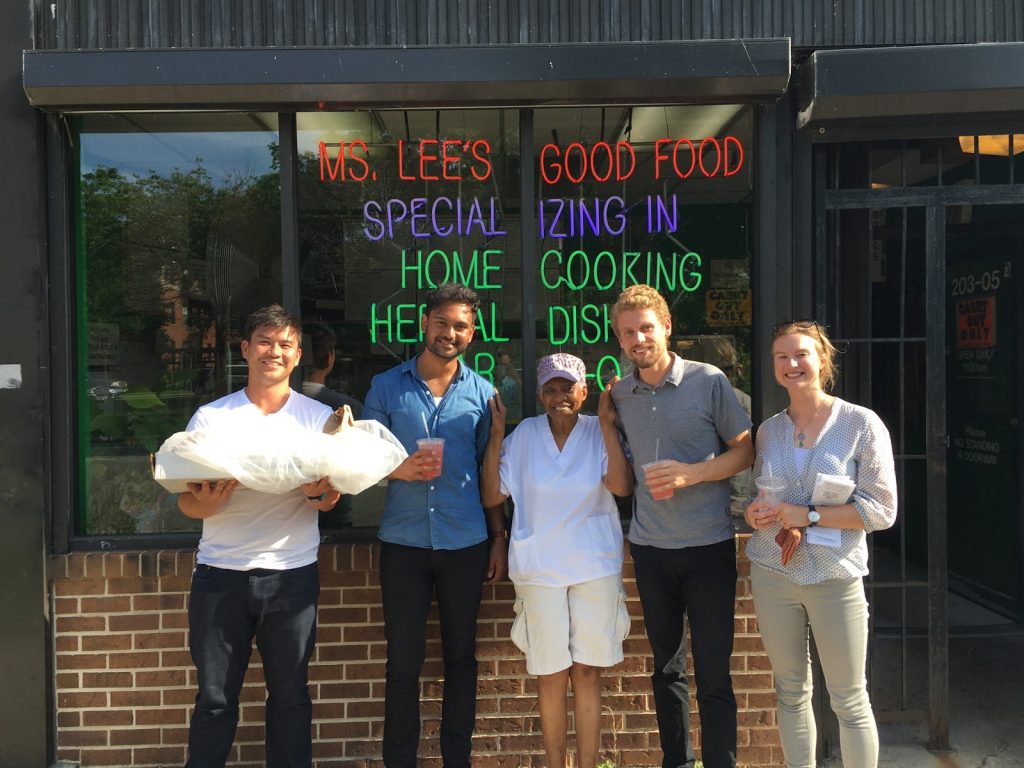 An exciting day for Team “Chicago’s Down Undah [,Mate’]”: they had the good fortune of meeting the Ms. Lee (whose succotash and lemon buttermilk pie are not to be missed), and Dean had his very first encounter with a squirrel. 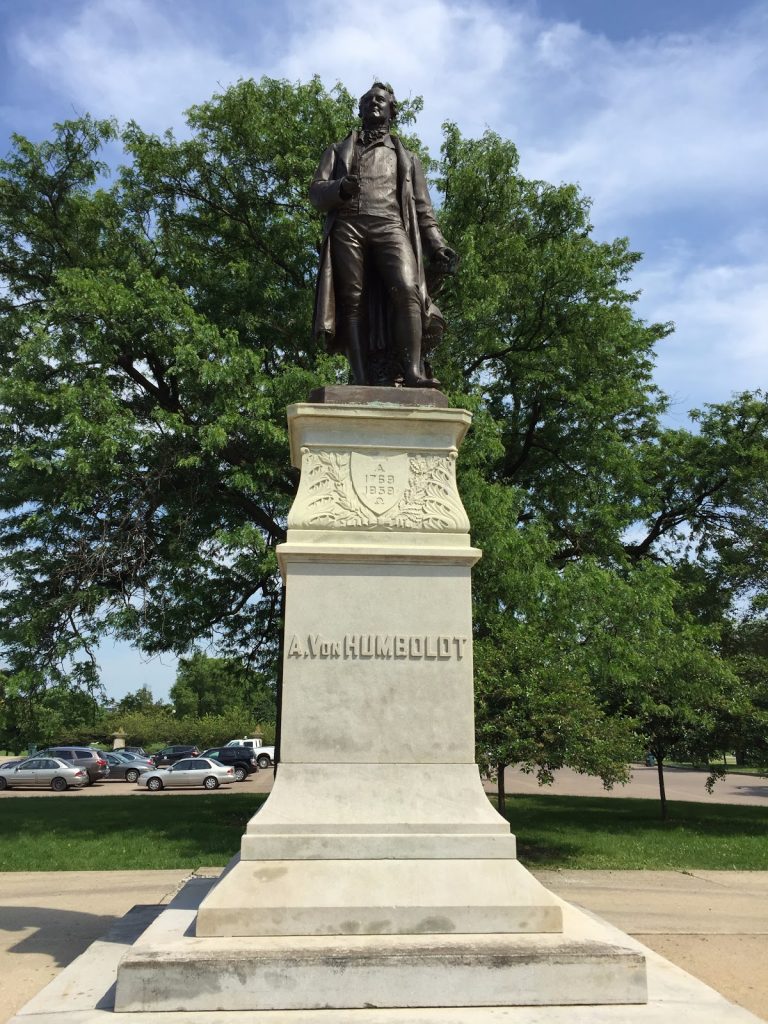 My team was assigned to my neighborhood, Logan Square, so I gave them a tour of some of my very favorite places, including Tastee Freez and Humboldt Park. 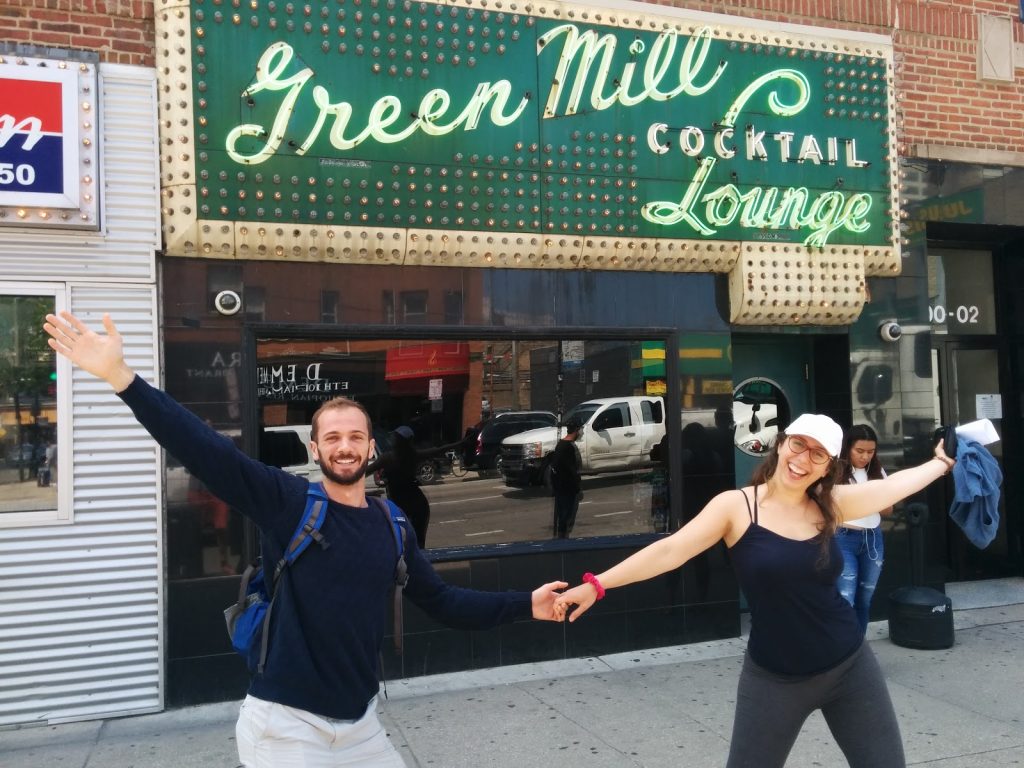 “Team” “Adolfo” went to the Green Mill, described as “supposedly a preeminent jazz bar, which I’m sure it is, but when you go at 2 PM it just seems like a seedy dive bar that sells the most Malort worldwide.” 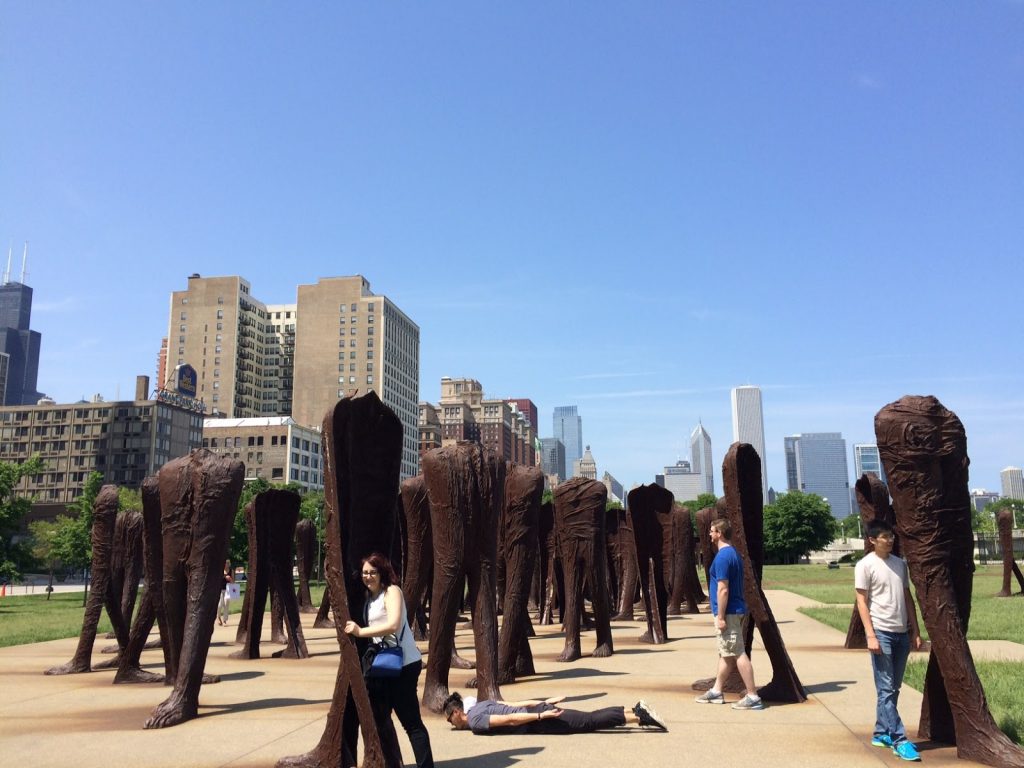 Many teams took photos of themselves interacting with public art, some by doing their best impressions of statues, some by taking part in a planking revival. 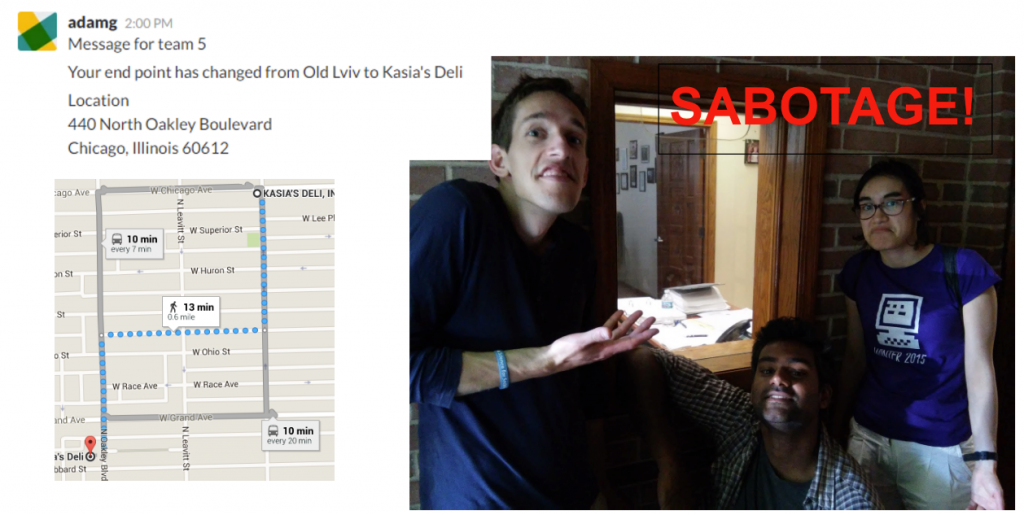 Team Paul had a trying afternoon, going to the site of the Haymarket Memorial and finding it had been relocated before being sent on a wild goose chase on the hunt for pierogi. 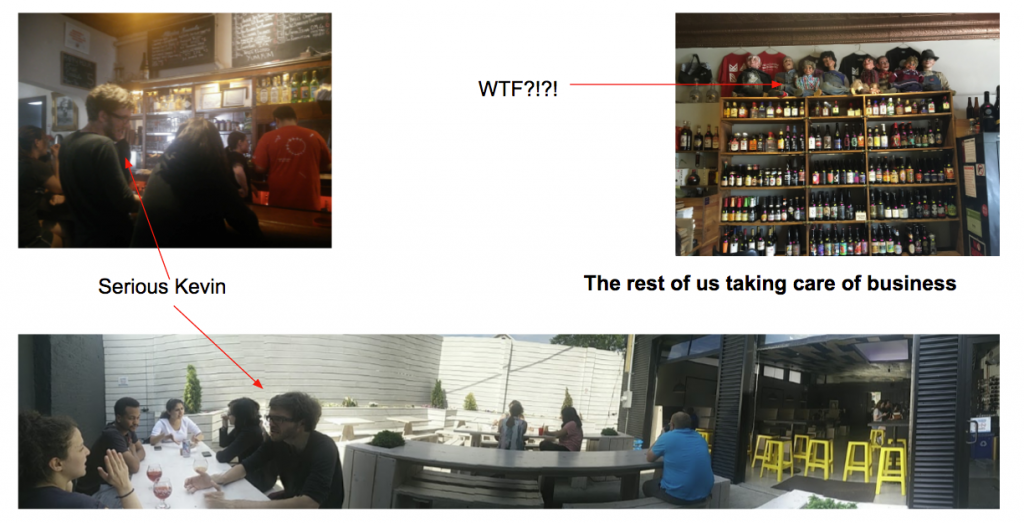 While I was planning the scavenger hunt, friends asked me whether I was worried that any of the teams would just spend the afternoon hanging out in a bar. Maybe I should have been… 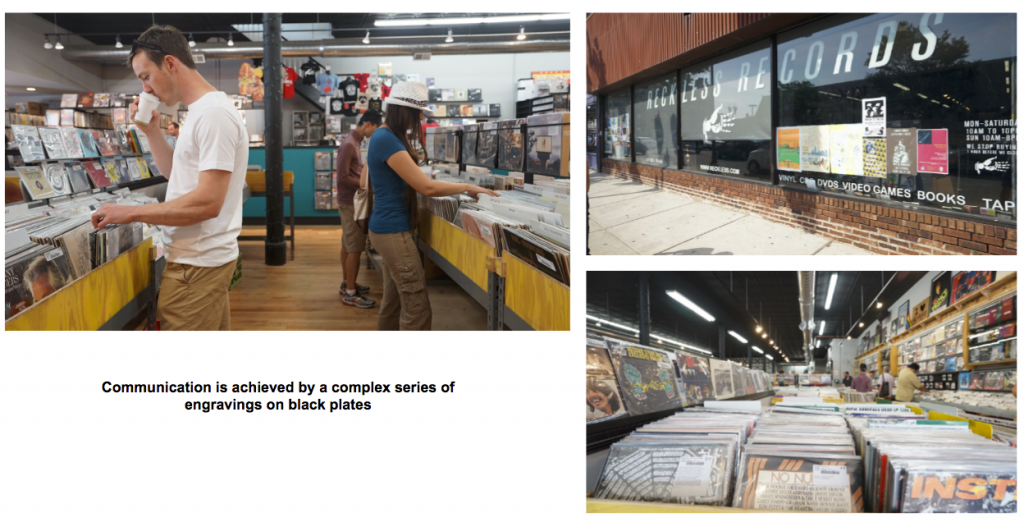 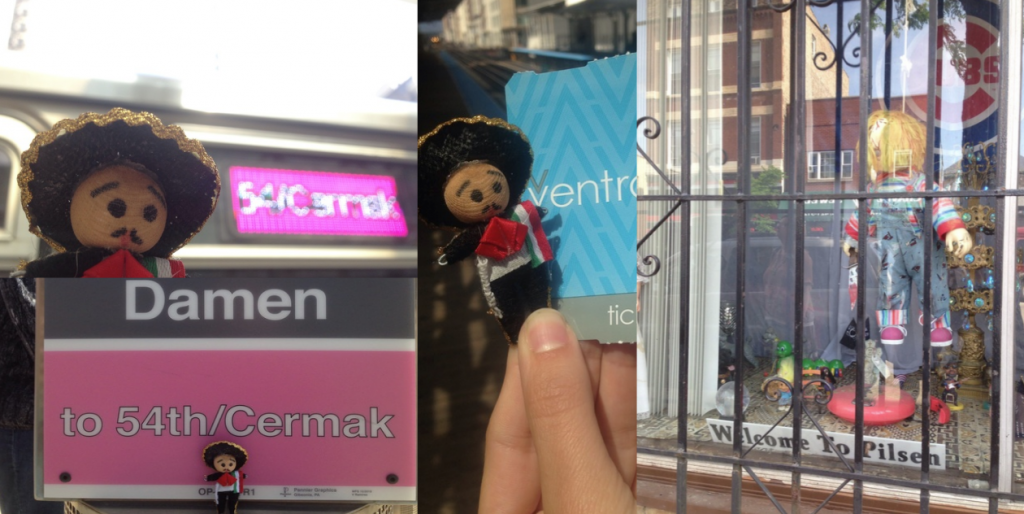 Pedro, with his guardian Fernanda and her team in tow, ventured to Pilsen in search of a “real Mexican.” 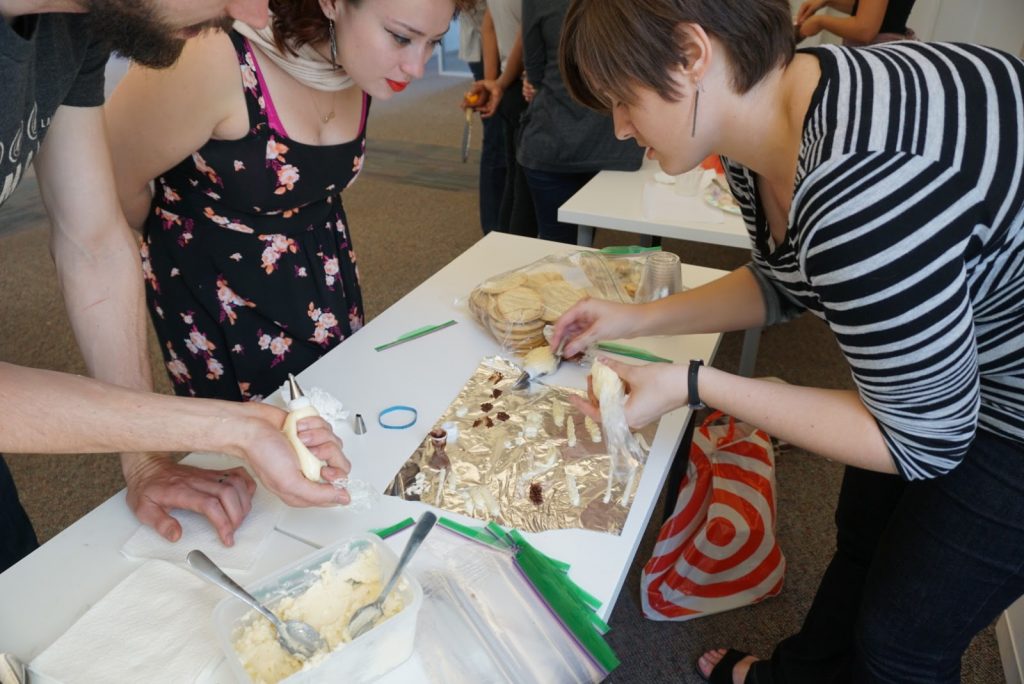 Hanna brought homemade cookies and frosting to teach us the art of making desserts that are as beautiful as they are delicious. 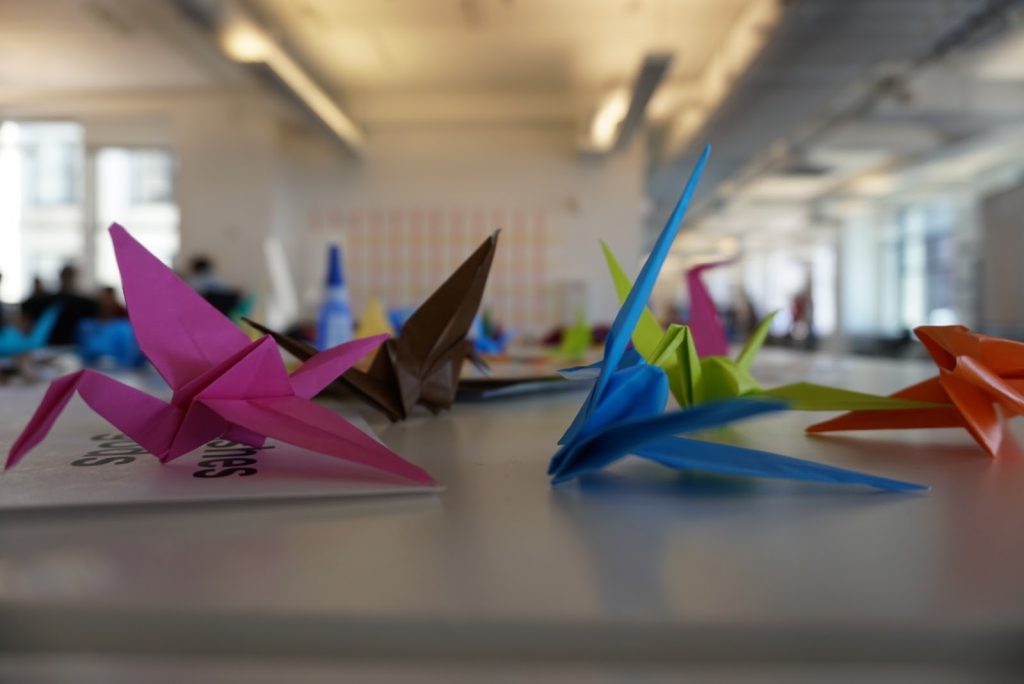 Lin taught us how to get the gods to grant our wishes by making origami cranes. 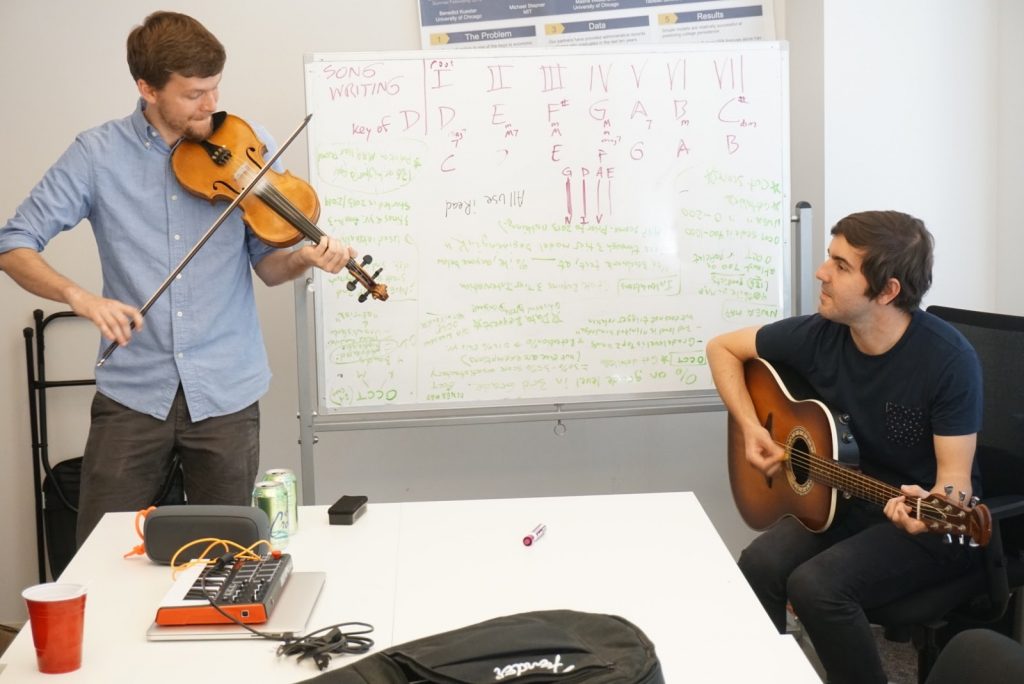 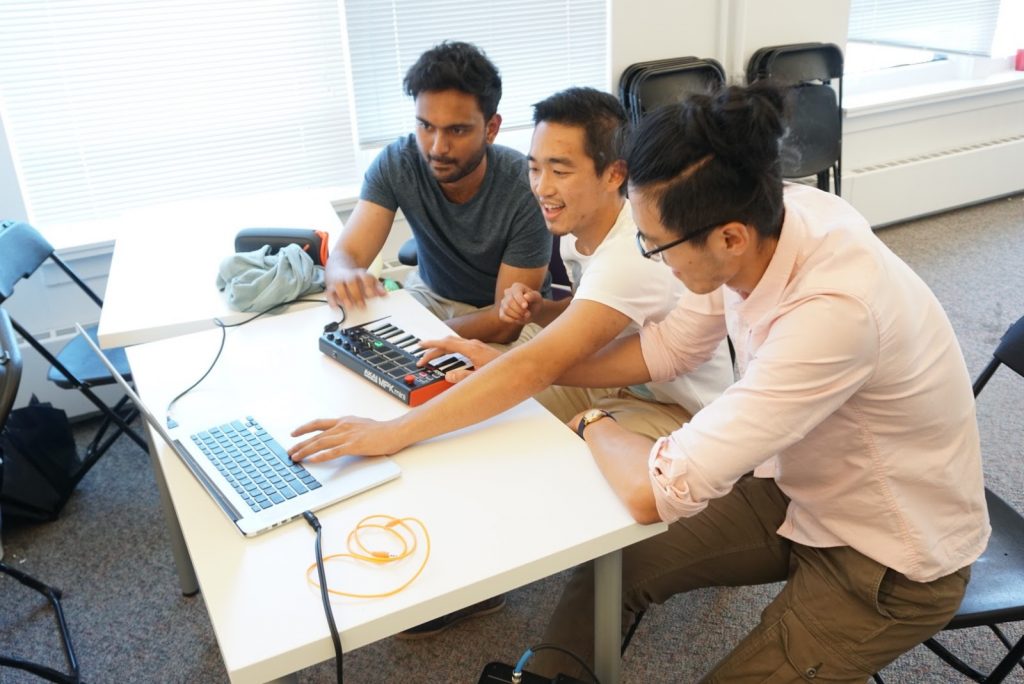 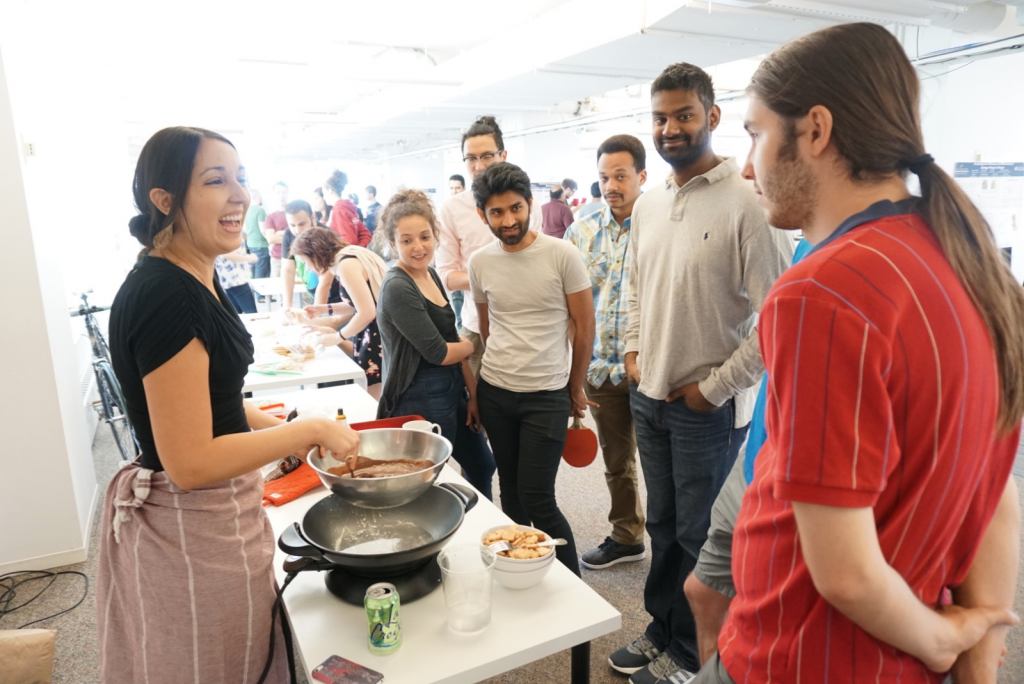 Food is king at DSSG, and stations involving tasty treats were popular, as demonstrated by Laila at her station, “Fun with Chocolate.” 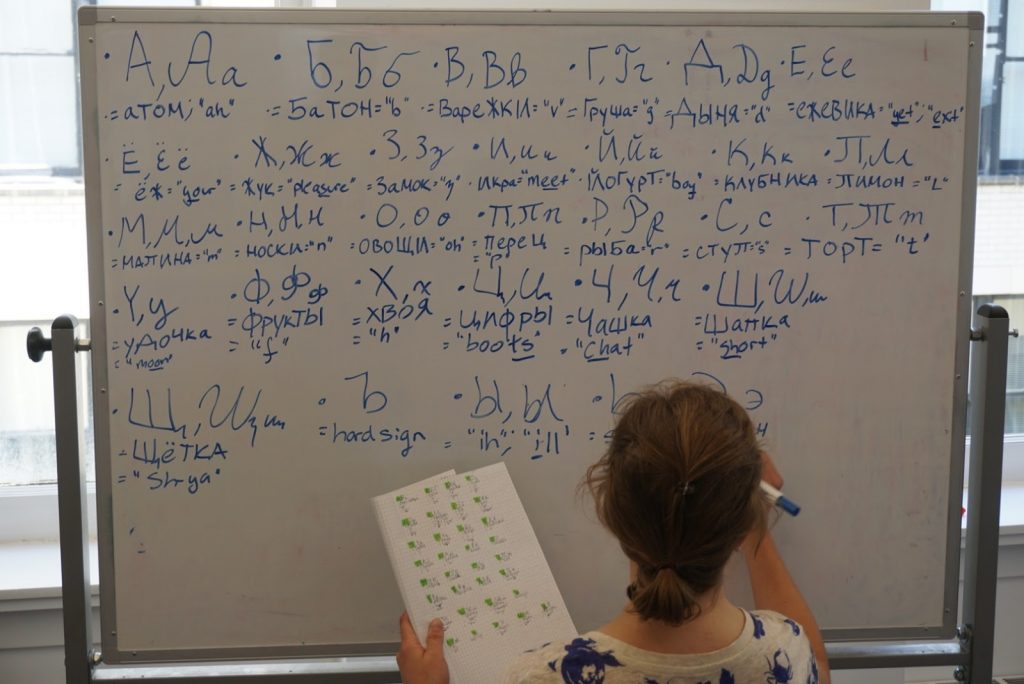 Some sessions taught us communication skills, like basic Russian with Maria and Snapchat with Hareem. 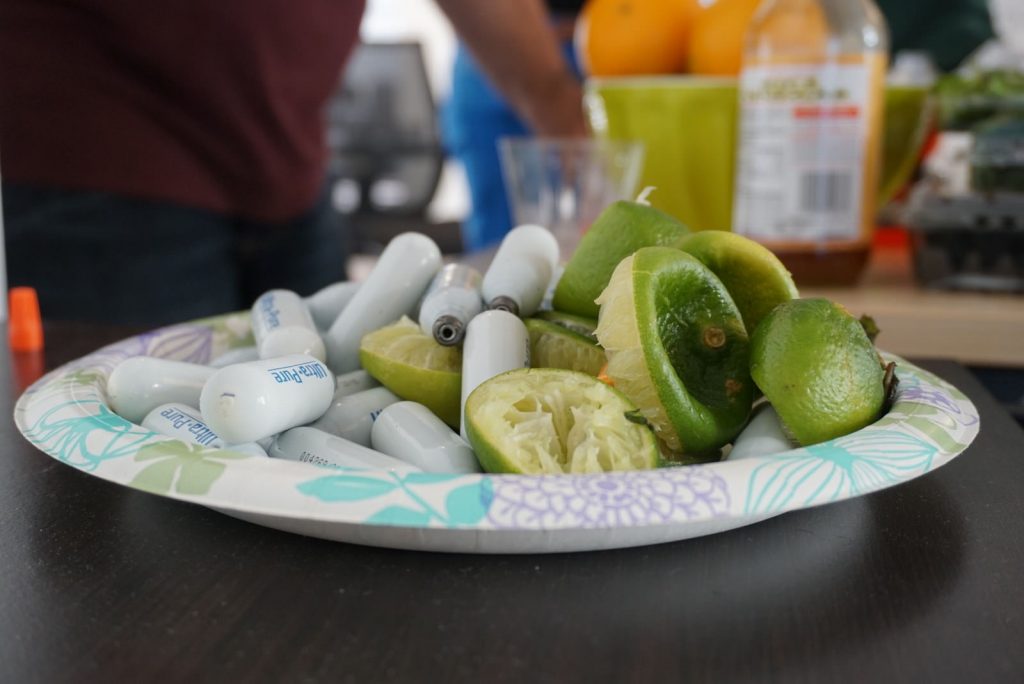 Rayid taught us how to infuse beverages instantaneously in “(Legal) Fun with Nitrous Oxide.” 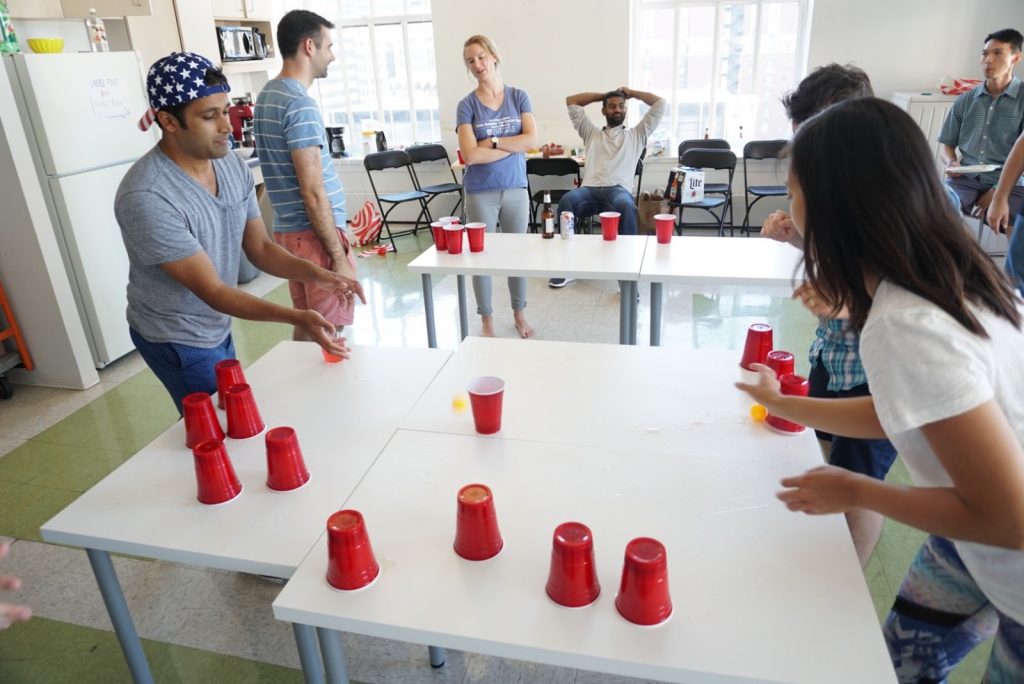 Equipped with Solo cups and backwards caps, we try to prove we’re not hopeless nerds. Some of us were totally in frats!