Every year, the National Day of Civic Hacking unites people across the country for hackathons, meetups, and other events centered around a common goal: using technology to improve communities and government. This year, Chicago celebrated National Day at the Civic Opera House with a hackathon-style Urban Sustainability Apps Competition organized by the Center for Neighborhood Technology. Despite only recently arriving in town for the start of the fellowship, 10 DSSG fellows dedicated most of their weekend to the competition, creating a powerful new platform for supporting innovation efforts that netted them a second place finish.

TechSpaces, the application built by the DSSG team, solves an important problem for nurturing innovation “ecosystems” around the country — finding a space for a city or region’s enthusiastic and talented people to gather, meet, and collaborate. It’s a challenge that comes down from no less an authority than the White House, whose Chief Technology Officer Megan Smith recently encouraged tech leaders to forge new connections with Americans of all ages, genders, and backgrounds. But to extend their reach beyond the standard tech bubble, these groups need to find more low-cost, accessible venues amenable to hosting meetups, learning events, hackathons, and other gatherings.

The idea for creating a tech-space search tool to address this hurdle originated months before the National Day of Civic Hacking, evolving from work DSSG co-organizer Matt Gee did with the U.S. Census Bureau, the Presidential Innovation Fellows program, local tech industry partners, and the Chi Hack Night community. The challenge was also seen as a good use case for CitySDK (City Software Development Kit), a new platform developed by the Census Bureau to make it easier for people to work with their data.

The apps competition provided a ripe opportunity to gather these threads into a functional project, which was developed by fellows Avinash Ahuja, Rashida Brown, Amy Hepner, Reid Johnson, Talia Kaufman, Benedict Kuester, Hemank Lamba, Esha Maharishi, Mahdi Moqri, and Asif Zubair with non-DSSG team members Eric Chandler and Steven Luker. By incorporating data from Google, Crunchbase, the Illinois Science and Technology Coalition, and the U.S. Census Bureau using the City SDK platform, the team created a tool that not only helps organizers find suitable venues, but also search for spaces located in neighborhoods where events can produce maximum benefit for the broader community.

Though the fast pace of the hackathon required some extreme hours, with some team members coding until 5:30 in the morning on Sunday, the team was able to produce a working prototype and even a development plan for the sustainability of the project. After a business pitch style presentation on Sunday afternoon, only 28 hours after the event began, the team’s effort was awarded second place behind a perishable food exchange app created by Purshable.

At its core, TechSpaces allows a user to find venues of various sizes all across the city. But the user can also hover over different neighborhoods and see various impact indicators, drawing upon census data, that describe the demographics of the area. For example, a “youth potential” score reflects how many people between 10 and 17 live in a given census tract, while a “career changer” score shows how many people in that area have a GED or high school education. Organizers can use these features to pick a venue that reaches their target audience, or to shape their event to better fit the characteristics of the community.

While the TechSpaces team used the City of Chicago for their test case, the platform can be easily adapted or scaled to any city or region of the country, combining the local census and Google data with other relevant data sets about the area’s tech landscape. It could also be used for more than just the primary goal of building innovation ecosystems; for instance, providing a tool for musicians or artists to find performance spaces, or for people running non-tech events. Those alternate uses might help the platform thrive as a non-profit endeavor, adding a revenue stream to support its free, philanthropic purposes.

“I was thoroughly impressed with the TechSpaces app built in less than 36 hours by the Data Science for Social Good Fellows during the Urban Sustainability Apps Challenge,” said Jeff Meisel, Presidential Innovation Fellow. “Their app has the potential to make a big impact in how community organizers do their jobs, by solving one of the biggest pain points, finding available spaces to host events. Through the use of open government data from the US Census Bureau and the CitySDK, their app helps community organizers target adults that are prime for career changes, youth who may be interested in going into technical fields, as well high-need areas at large within the community.” 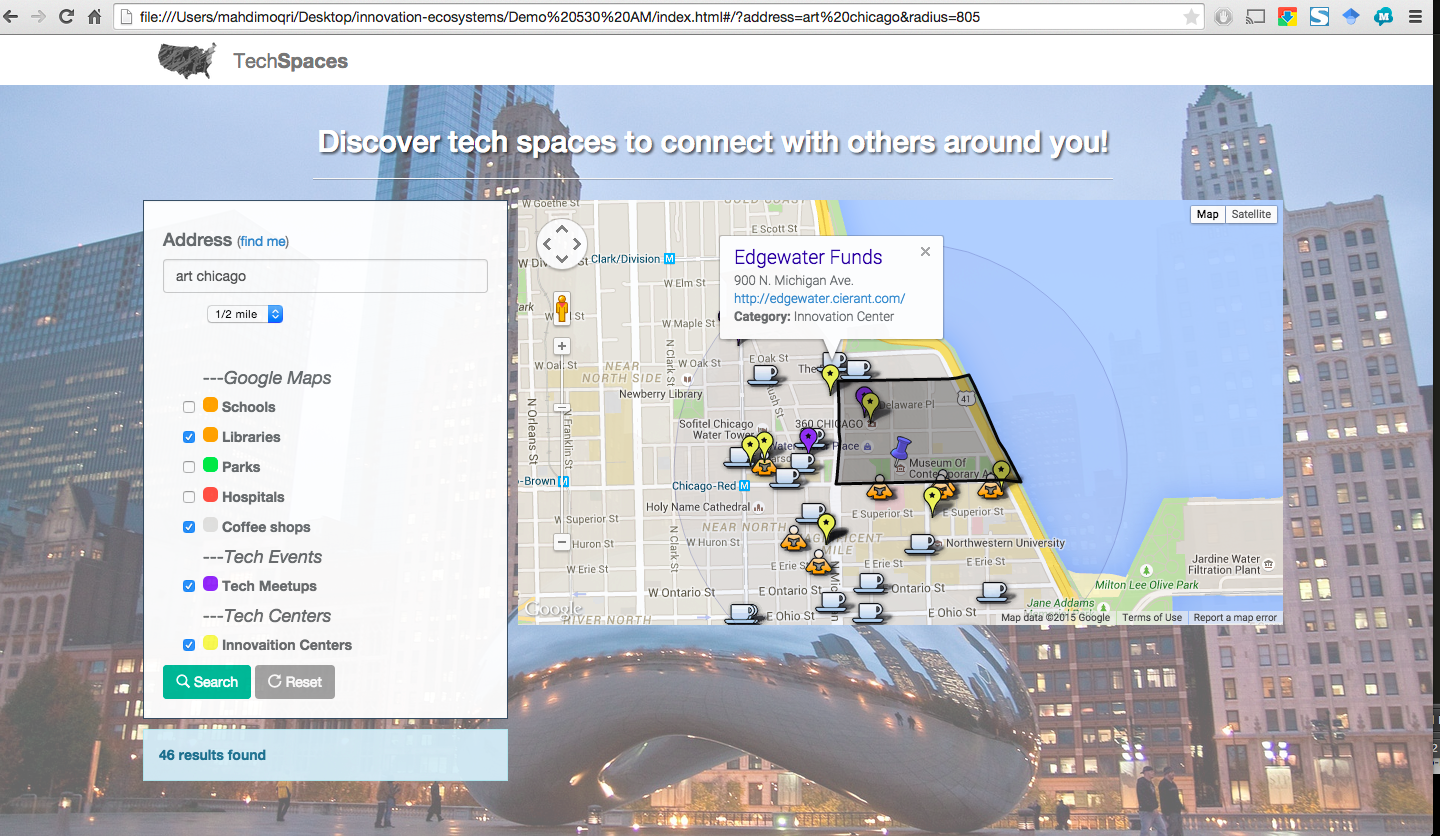 Seeing a project through from idea to implementation to business plan on fast forward was an exciting and novel experience for the fellows, many of whom hadn’t participated in a hackathon before. But the urgency necessitated an organizational discipline that could be carried over to the (relatively) slower pace of DSSG.

“It helps with seeing the big picture, setting goals for the week or even a single day and how that fits into the final product,” said fellow Rashida Brown, a graduate student in epidemiology at the University of California, Berkeley. “I think it made me more focused on the entire project pipeline and product viability.”