Boarded up buildings and overgrown lots have plagued Chicago’s low-income neighborhoods for decades.

Over the past five years, however, vacant and abandoned properties have spread beyond the inner city and into the suburbs, disrupting formerly stable working and middle class communities and prompting the creation of a county-wide land bank, a new tool for fighting blight.

The culprits: foreclosures and recession.

A Rising Tide of Foreclosures

Beginning in 2006, a first wave of foreclosures hit poor and minority neighborhoods on Chicago’s South and West Sides. When the economy tanked in 2008, the foreclosure crisis spread into the suburbs as widespread unemployment and underwater mortgages prompted many property owners to stop paying their bills.

Hundreds of thousands of families lost their homes, leaving vacant and abandoned buildings in distressed neighborhoods already full of them – and in communities that had never seen them before.

This map from the Urban Land Institute and the Institute for Housing Studies tells the story:

What exactly are these vacant and abandoned properties, and why do they matter?

Vacant properties are simply properties with nobody in them – empty lots or shuttered buildings. In Cook County, many of these properties are “real estate owned” (REO) – owned by a bank as the result of a foreclosure.

Vacant and abandoned properties are a problem because they drag down the surrounding community. They have three types of negative impacts:

Why Vacant and Abandoned Properties Happen

We know there are a lot more vacant and abandoned properties in the Chicago area than a decade ago, and we know they have bad spillover effects on neighborhoods. But why do they arise to begin with?

Properties become vacant or abandoned because of weak real estate markets in impoverished neighborhoods or because of the recent region-wide foreclosure crisis, among other reasons. But they often stay that way because surrounding communities are saturated with blight, have trouble accessing credit, or for tricky legal issues:

These legal issues not only prevent many properties from being redeveloped by the real estate market, but they’ve also hamstrung local government’s response to the foreclosure crisis.

Under the Neighborhood Stabilization Program, the City of Chicago has spent $168 million since 2009 to buy and fix up 804 foreclosed homes, intending to move them from disrepair back to the real estate market. But the City couldn’t get title on around 90% of the residences it first wanted to purchase, and has only found buyers for 91 of the units it renovated.

To date, there just hasn’t been a government agency with the authority to remove the legal barriers that keep vacant and abandoned properties from being reused and redeveloped.

So in January 2013, Cook County Commissioner Bridget Gainer (picture below) and President Toni Preckwinkle created the Cook County Land Bank, a new entity designed to do just that. 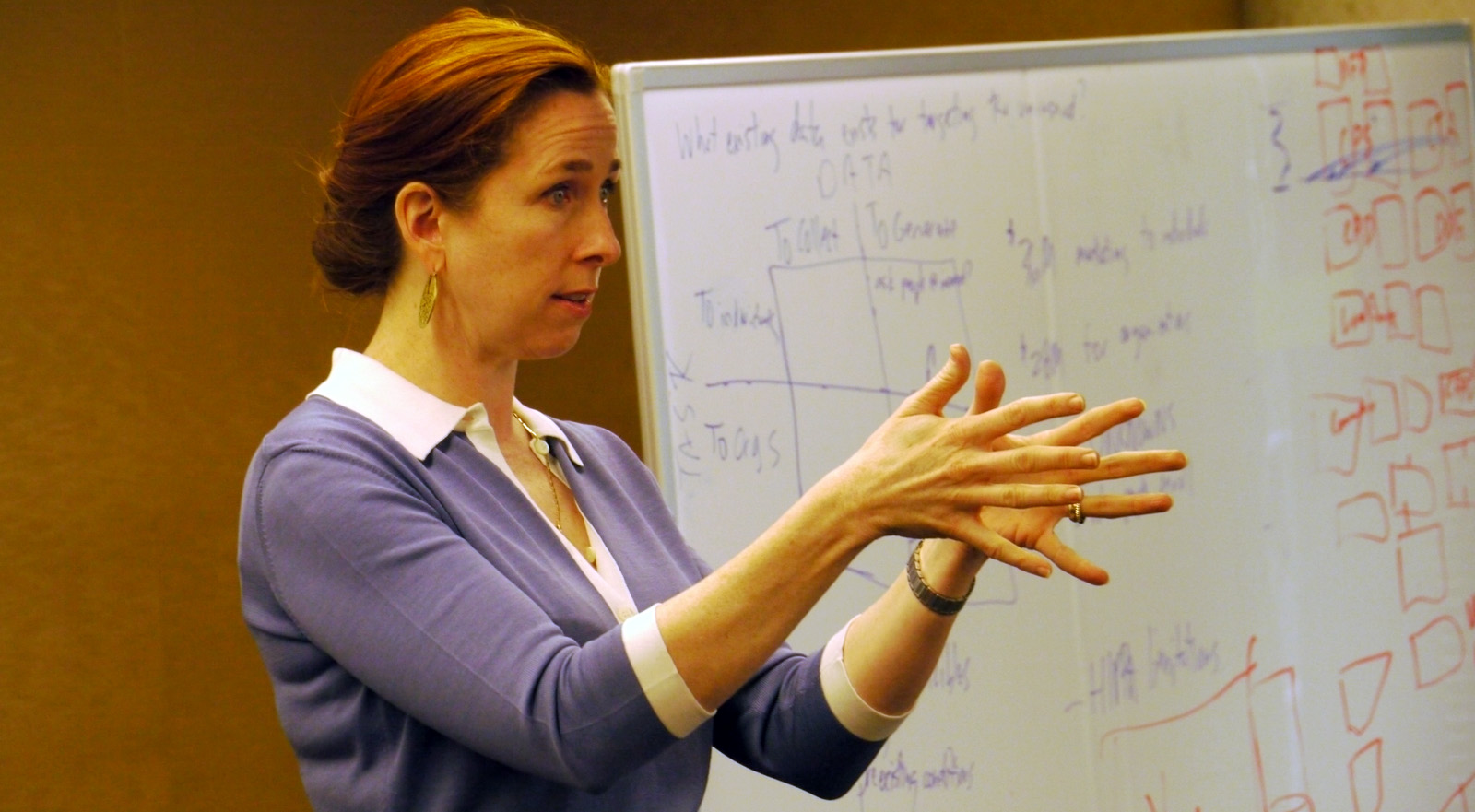 The land bank has one job: to acquire vacant and abandoned properties throughout Cook County and return them to productive use.

To do that, it must make two key decisions:

Land banks have been created in St. Louis, Cleveland, Detroit and around a dozen other cities. Most are Rust Belt cities grappling with decades-old blight or Sun Belt boom towns reeling from the effects of the foreclosure crisis.

(To learn more about land banks, see this publication from the Center for Community Progress.)

Depending on the strength of the local real estate market, land banks tend to adopt either a fight the blight or midwife the market strategy. The Institute for Housing Studies explains how this works:

“In areas with no immediate demand [for development], they can act as efficient and tax-free holders of land for future uses, securing property tax-free until demand returns.

In areas where demand exists, but liens and unclear title on properties serve as barriers to their reuse, land banks can act as facilitators that clear title and debt in order to sell or transfer land to parties capable of immediate redevelopment.”

But there are tens of thousands of boarded up homes and overgrown lots in Cook County, and the land bank’s budget is limited. How will the agency figure out which of these properties to acquire, and what to do with them?

Where can it actually step in and be effective, investing in properties that would not otherwise have been redeveloped, instead of soon-to-be-sold or unsellable ones?

That’s the key question facing this government agency. And it’s the question we’re going to help them answer, in partnership with the housing and foreclosure experts at the Institute for Housing Studies at DePaul University.

In a future post, we’ll delve into the analytics tool we’re building to help the land bank decide which properties to go after.