We spent our first day getting to know the program, and each other.

“Three months ago, we didn’t know we were doing this. Lots of people did a ton of work to get you here,” Ghani said. “But this is now your program – it’s up to you to make this work.”

Matt Gee walked everyone through the program schedule. This week, fellows will get acquainted with their projects and go through a tech bootcamp run by Software Carpentry, a nonprofit that teaches scientists how to code.

Teams will spend week two learning from partner government and nonprofit organizations to understand the social problems they work on, and to pin down issues they can tackle with data.

(We’re not quite ready to announce our partners. Keep watching this space!)

They’ll dig into the problems and associated data by week three, brainstorming useful projects to build out during the remaining nine weeks.

Twenty eight of our thirty six fellows were in attendance, some coming from as far away as Mexico City, Israel, and Nepal. The rest are still held captive by late-running academic calendars.

After a round of introductions, we played a bit of opinion spectrometer. 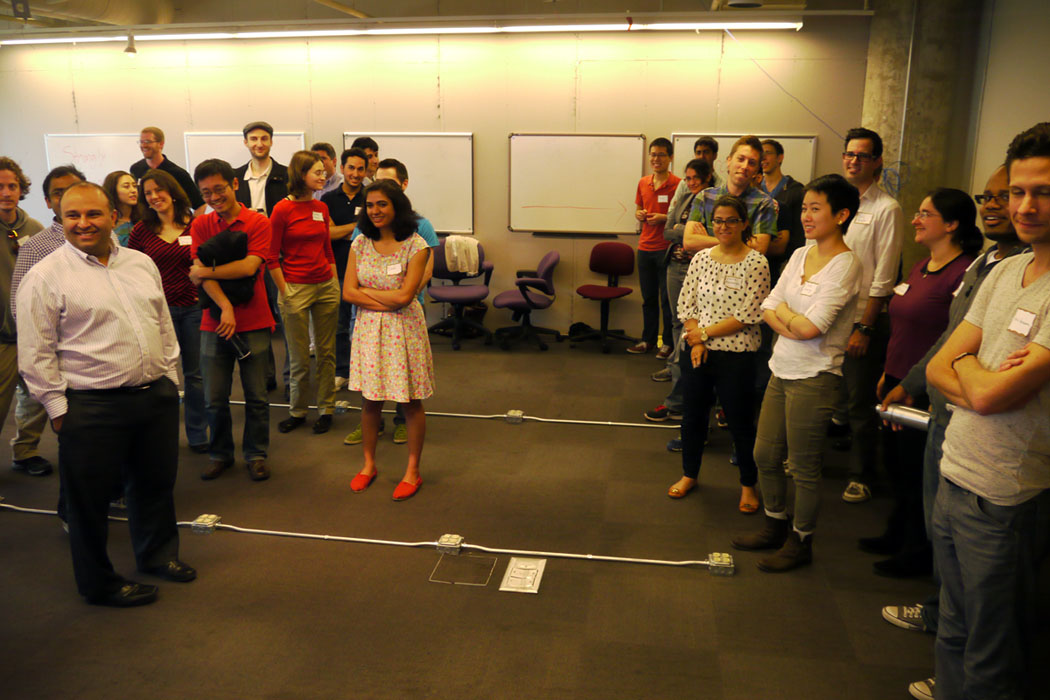 The premise is dead simple: a controversial statement is thrown out, and people place themselves along a spectrum according to whether they agree or disagree.

The idea is to tease out where people stand on contentious issues, and spark vicious civil debate. It’s a terrific ice breaker.

and, you guessed it:

“Data science is no different from statistics”

Next, we gorged on pizza. Mentors ran through the twelve (!) projects we’re working on. Fellows jotted down which skills they’ll be teaching each other and what they hope to get done this summer.

And then we walked from the office to beautiful Millennium Park for a free concert.

Speaking of which, our new digs are at 303 E. Wacker Drive, in the heart of downtown Chicago and next to the 2012 Obama campaign’s former headquarters.

On that note, we’re rooming with Civis Analytics, a data consultancy formed by much of the campaign’s celebrated analytics team.

The office is basically one big, funky-colored bullpen with incredible views of Chicago’s core. And yes, there’s a ping pong table.

Bean bags are forthcoming. Scooters are banned, though. Data science is serious business, after all.